The Eurasian bittern or great bittern (Botaurus stellaris) is a wading bird in the bittern subfamily (Botaurinae) of the heron family Ardeidae. There are two subspecies, the 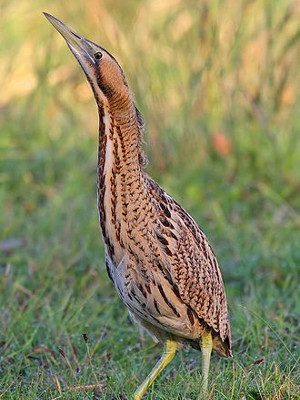 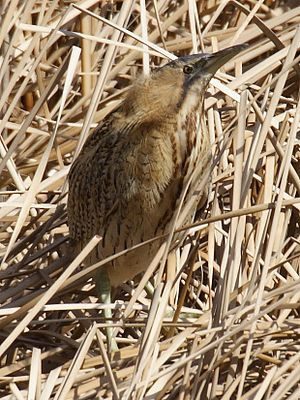 northern race (B. s. stellaris) breeding in parts of Europe and Asia, as well as on the northern coast of Africa, while the southern race (B. s. capensis) is endemic to parts of southern Africa. It is a secretive bird, seldom seen in the open as it prefers to skulk in reed beds and thick vegetation near water bodies. Its presence is apparent in the spring, when the booming call of the male during the breeding season can be heard. It feeds on fish, small mammals, fledgling birds, amphibians, crustaceans and insects.

The nest is usually built among reeds at the edge of bodies of water. The female incubates the clutch of eggs and feeds the young chicks, which leave the nest when about two weeks old. She continues to care for them until they are fully fledged some six weeks later.

With its specific habitat requirements and the general reduction in wetlands across its range, the population is thought to be in decline globally. However the decline is slow, and the International Union for Conservation of Nature has assessed its overall conservation status as being of “least concern”. Nevertheless, some local populations are at risk and the population of the southern race has declined more dramatically and is cause for concern. In the United Kingdom it is one of the most threatened of all bird species.